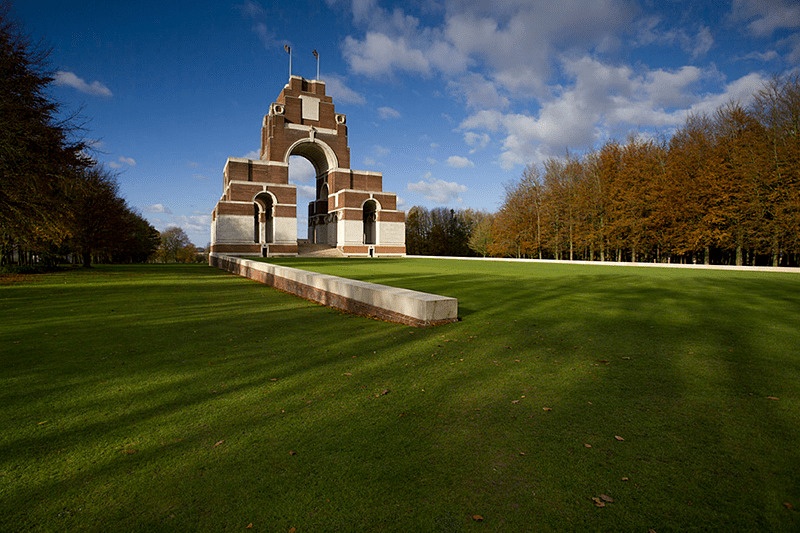 A major restoration of the Commonwealth War Graves Commission’s largest memorial in the world – the Thiepval Memorial to the Missing of the Somme – has taken an important step forward.

Specialist partners Monument Group have been appointed to support CWGC to preserve the iconic structure for future generations.

It will see the completion of an ambitious conservation programme that began in 2014, before pausing to allow the Battle of the Somme centenary to be marked in 2016.

Phase one of the work at Thiepval consisted of repairs to the roofs, rainwater pipes and brick work above the main arch. The second phase starting in March 2021 will be a continuation of this work, along with additional drainage works, water proofing, restoration of name panels, relaying of paving and securing the outer layer of stone with thousands of brick ties.

This essential work will ensure this historic memorial will be preserved for generations to come. The project will complete in May 2022. Throughout much of this period the memorial and name panels will not be accessible to the public.

During this time a free-to-use digital exhibition will be available for visitors to explore. In The Shadow of Thiepval can be accessed while on site using a smart phone or tablet. The exhibition tells the story of the Battle of the Somme, the memorial’s construction and the men commemorated on its walls.

A virtual display of the memorial panels will also be included in the exhibition. The adjoining cemetery, and the Thiepval Visitor Centre remain open as usual.

CWGC Director General, Barry Murphy, said: “For nearly a century the Thiepval Memorial has stood as a monument to the sacrifice of those killed on the Somme in the First World War. Today, the Commonwealth War Graves Commission takes an important step closer to preserving this iconic memorial for the next century and beyond.

“We look forward to working with our partners, Monument Group, in completing this vital restoration work so that new generations will be inspired by the incredible stories of those named on its walls as well as by the architectural splendour of this Sir Edwin Lutyens designed masterpiece.

“We recognise that Thiepval is at the heart of any battlefield tour of the Somme, so while the memorial undergoes its essential restoration, CWGC is providing an innovative new way of exploring the site and surrounding landscape.

“Through an interactive multimedia exhibition visitor will be able to learn about the memorial, its place in the landscape, and the Battle of Somme. The exhibition will also feature some of the individuals we commemorate, the wider work of the CWGC and regular updates on the renovation as it happens. The exhibition will be freely available to all visitors via their mobile devices – creating an intimate experience of Thiepval’s compelling history through film, sound and arresting imagery.”

Willy Van Noten, Managing Director at Monument, said: “After several successful collaborations with the CWGC in restoring unique historical sites in France and Belgium, we are once again, proud and honoured to be part of the restoration of the monumental world-known site Thiepval in France. Group Monument is committed to restore the site to its full glory.”

Scaffolding will be erected on the memorial from March 2021. Work had originally been planned to start in January 2020 but was delayed due to the impact of coronavirus restrictions.

The Thiepval Memorial commemorates more than 72,000 missing war dead of the Battle of the Somme. It was designed by Sir Edwin Lutyens and unveiled by the Prince of Wales in August 1932.

We would also like to thank our French partners, La Direction Régionale des Affaires Culturelles (D.R.A.C.), La Région Hauts-de-France and Le Conseil Départemental de la Somme, for their approval for the works and financial support.